Apple AirPods are the best selling earbuds right now which even other smartphone users prefer. There are new rumors of Apple selling out their AirPods with the next model of iPhone in a bundle package deal. It means one can get the AirPods free with the upcoming 2020 Apple iPhone 12 mobile and the deal sounds too good to be true.

Want to know how Successful Airpods are for Apple?

Hence, all the users who are planning to upgrade their iPhones in the next year should at least wait for some time for the rumor to be clarified. There are chances that the reports are fake and Airpods are not free with the next iPhone, but there is no harm in waiting for a few months.

Apple Airpods currently costs $159 and adding that cost to the already high priced iPhone 12 could make it much expensive. But the people who purchase Apple products aren’t usually bothered by the prices and want the highest quality possible. It is also possible that giving out AirPods in a bundled package with iPhone 12 could boost its sales as many of the users will find the perfect opportunity to upgrade their iPhones.

However, Airpods are one of the best selling products from Apple and they had to double the production due to increased demands. It means they will mostly offer some kind of deal where AirPods could be purchased at a discounted rate together with the iPhone 12.

Apple would most likely give out both options as a normal iPhone 12 and (iPhone 12 + Airpods bundle) deal. Many users won’t prefer such a deal as they would be already having the Airpods by then.

The reason could be increased competition from Xiaomi and Samsung who has come up with their own True Wireless Stereo (TWS) buds. It is why Apple is planning to come up with some sort of marketing tactic that pairs each of its iPhone with Airpods wireless earbuds. 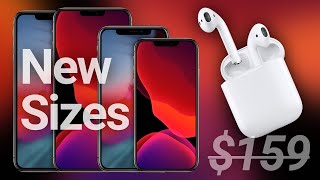