Over the past couple of days the whistleblower complaint made against US President Donald Trump has been making quite the headlines! Major allegations have been made against the President of the United States and if proven to be guilty, this could have dangerous repercussions – even leading to the impeachment of President Trump!

Let us cut the clutter around this and take a closer look at what this whistleblower report actually contains and why it is so important!

Devin Nunes is back to “Russia hoax.” The whistleblower complaint is about more than Trump’s impeachable & likely illegal efforts to get dirt on Biden. There’s an undercurrent of Trump seeking an alternative reality where Russia didn’t interfere with the 2016 election.

Whistleblower Report: What Does it Contain?

A nine-page document has been released to the public while the entire report is being scrutinized! The report contains the transcript of a call between US President Donald Trump and Ukrainian President Volodymyr Zelensky. In his conversation, Trump told his Ukrainian counterpart to launch an inquiry on Joe Biden’s son who worked for a company that drilled gas in Ukraine.

If proven to be true, this would essentially mean that Trump used the powers of his office for personal political gain by trying to influence other nations to meddle in the 2020 US Presidential elections as Biden is currently the frontrunner Democratic candidate against him! The report further contains evidence that the White House tried to conceal the report.

Maguire: Trump and the White House did not ask him for the identity of the whistleblower. So then on what basis did Trump call the whistleblower a political hack who was spying on him as an enemy of the United States? Simple, Trump made that shit up. That, too, is a big deal.

Who is the Whistleblower?

As of this writing, no one really knows who the whistleblower is. This is essential to protect the identity and the safety of the person who took this step in the national interest. Perhaps at the end of the investigation, if Trump gets impeached, the identity might be revealed later on. However, nothing can be said for certain as of now. 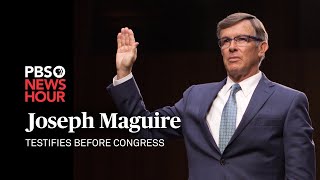