Domestic Girlfriend Season 2 release date is still not announced but anime fans are confident that the series will be renewed soon. While it may not be the best anime out there, the first season of Domestic Girlfriend has gone viral due to the controversial plot and imagery. The producers won’t leave a chance to make more money and the second season will surely come out.

Season 2 story will start where the last episode left, Natsuo and Hina had to break up as the news of their relationship reached the high school. Since Natsuo was a student and Hina was a teacher, the later was forced to leave the city. It means that “Domestic Girlfriend” Season 2 will focus more on Rui and Natsuo’s relationship as the two step-siblings are free to be together without any bounds.

When are we going to get Domestic Girlfriend season 2? There is enough manga chapters for there to be 3 seasons

The central plot of Domestic Girlfriend Season 2 will be the love triangle between Rui, Natsuo and Hina. The manga series has hinted that the relationship between Rui and Natsuo will move forward and it will ultimately lead to their wedding and they will have two kids. While the manga chapters show some of the flash-forwards, it never shows the face of Natsuo’s wife. Season 2 might avoid the flash forwards and focus more on the individual character development of Natsuo, Rui and Hina.

Domestic Girlfriend Season 2 has not been renewed officially yet but it has not even been canceled. There are some reports that the production work is carried on the anime and it can be ready for a 2021 premiere. Fans are slowly turning towards the manga series to know the future story. Most of the anime fans are confident that Domestic Girlfriend Season 2 will come out before the end of this year. 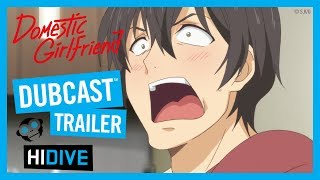