Demon Slayer: Kimetsu no Yaiba Chapter 198 will follow up to the events after Muzan attacked with the Blood Demon arts on Tanjiro and Obanai. The demon was almost dead due to the effect of Tamayo’s medicines but in the last moment, Muzan tricked everyone by unleashing a new attack. Fans are hoping that Tanjiro will counter the blood arts with Nichrin blade in Demon Slayer 198 manga chapter.

Also, Inosuke Hashibira has now recovered and won’t let Muzan escape in Demon Slayer 198 as the other Pillars will also try to stop the demon. Here is everything you need to know about Demon Slayer: Kimetsu no Yaiba Chapter 198 release date, raw scans leaks, plot spoilers, theories and ways to read online the manga chapters.

Demon Slayer: Kimetsu no Yaiba Chapter 198 will show the Pillars healing and regrouping back on the battlefield to stop Muzan from escaping. The demon in his last ditched effort attacked Tanjiro and Obanai with his Blood Demon arts. Tanjiro is having a hard time breathing as his lungs are squashed and everyone is worried about the safety of the two Pillars.

But Tanjiro won’t be defeated that easily in “Demon Slayer” Chapter 198 as he will neutralize Muzan’s attack by using the Nichirin blade. Muzan will further get pissed off when he sees that Tanjiro and the other Pillars keep fighting even after so many injuries and he won’t have a chance to escape again. Demon Slayer 198 manga chapter might finally bring the end to Tanjiro vs Muzan battle as the demon tries to escape before sunlight hits.

Demon Slayer: Kimetsu no Yaiba Chapter 198 will release on the next Sunday, March 15, 2020, in stores as per VIZ’s official website. The raw scans for Demon Slayer 198 will be leaked out 2-3 days prior on the internet around March 13, but it would be better to wait for the official release.

Demon Slayer: Kimetsu no Yaiba, Ch. 197: Another riveting chapter in one of the greatest manga battles of this era! Read it FREE from the official source! https://t.co/jjzBm4bBnd pic.twitter.com/TZFFfBHwkq 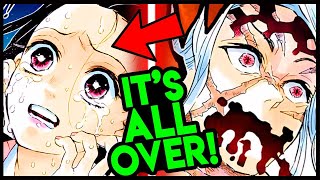