Demon Slayer: Kimetsu no Yaiba Chapter 195 will release this weekend but the raw scans of the manga are already leaked on the internet. Fans are discussing the spoilers and it has revealed that Muzan will talk about Yoriichi during his fight with Tanjiro. Nezuko will also make a comeback in Demon Slayer 195 manga chapter and she might turn into a human again.

It is also expected that Tanjiro’s mission will come to an end but the death of Muzan has not been confirmed. Here is everything you need to know about Demon Slayer: Kimetsu no Yaiba Chapter 195 release date, raw scans leaks, plot spoilers, theories and ways to read online the manga chapters.

Demon Slayer: Kimetsu no Yaiba Chapter 195 leaks talk about Muzan describing his fight with Yorrichi several years ago. The demon said that Yorrichi looked like a regular human weakling with no fighting spirit or intention to kill but almost killed him in the encounter. Muzan vs Yoriichi fight was like a myth of legend where the later should be called as a monster.

Demon Slayer Chapter 195 will also bring back Tanjiro’s sister Nezuko who will be cured now and could turn into a human. But that creates another problem for the demon slayers as Nezuko won’t be able to use her fire healing powers and save all the heroes dead from Muzan’s poison. There are chances that Nezuko becomes some sort of human-demon hybrid to save everyone in Demon Slayer: Kimetsu no Yaiba Chapter 195 or the effect of poison ends when Muzan is killed.

Demon Slayer: Kimetsu no Yaiba Chapter 195 will release on this Sunday, February 23, 2020, as per VIZ’s official website. The raw scans for Demon Slayer 195 are leaked out on the internet and fans are discussing the spoilers on Reddit and other social media platforms.

Demon Slayer: Kimetsu no Yaiba, Ch. 194: Tanjiro’s surpassed his limitations, but will it be enough to bring down the mighty Muzan? Read it FREE from the official source! https://t.co/92tt0cT5va pic.twitter.com/kAP2VPHRXj

It would be better to read latest chapters of Demon Slayer: Kimetsu no Yaiba can be read on VIZ media and Shueisha’s Shohen Jump, and Manga Plus official apps, website and platforms. One should always read the manga from their official websites for free as it would help the creators and inspire them to make more interesting stories. 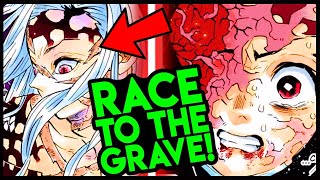