It was revealed in Demon Slayer chapter 192 that Tanjiro didn’t exactly learn those techniques, but he was provided clues on how to use them in a fight. Here is everything you need to know about Demon Slayer: Kimetsu no Yaiba Chapter 193 release date, raw scans leaks, plot spoilers, theories and ways to read online the manga chapters.

Tanjiro used the dreamlike coma experience to perfect his memory of the twelve techniques which he already knew. Although it wasn’t exactly similar to what Yoriichi performed, there were a few differences in the wrist angle, hand placement, and breathing techniques. It means that Demon Slayer: Kimetsu na Yaiba chapter 193 will show Tanjiro trying to perfect them and attempt the 13th form by combining the 12 forms.

The next chapter of Demon Slayer manga will also reveal the secrets behind Tanjiro’s earrings as it could be given Yoriichi to his ancestors when he taught them the breath of sun techniques and told to pass it down to the future generations. Tanjiro will theorize that all twelve forms have to complete in succession and it will form the 13th form in Demon Slayer: Kimetsu na Yaiba chapter 193. It will be a nice parallel to the ancient fight as Muzan sees Yoriichi while fighting Tanjior in the next chapter of Kimestu na Yaiba manga.

Demon Slayer: Kimetsu no Yaiba Chapter 193 will release on this Saturday, February 8, 2020, as per VIZ’s official website. The raw scans for Demon Slayer 193 will be leaked out 2-3 days prior on the internet and it would be better to wait for the official release.

Demon Slayer: Kimetsu no Yaiba, Ch. 192: Tanjiro continues his journey into the past. Will he learn what he needs to in time? Read it FREE from the official source! https://t.co/mERc1SfR3i pic.twitter.com/UvFp83GuAL 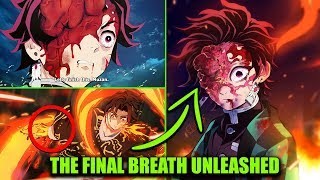