Demon Slayer Infinity Train movie is coming out this year and fans of both the anime and manga series are extremely excited. Based on the manga series Kimestu no Yaiba, the Demon Slayer anime has become vastly popular all over the world. Demon Slayer movie has been making rounds since the last year and the trailer looks very promising.

It is why the makers decided to turn the most interesting story arc “Infinity Train” as a full-length movie which was announced last year. Here is everything you need to know about the “Demon Slayer Infinity Train” release date, trailer, cast, spoilers and connection with anime season 2 of anime series.

Demon Slayer movie release date has finally been confirmed as October 16 2020, the fall of 2020 as per the latest official trailer. There are some chances that the ongoing Coronavirus pandemic could delay the theatrical release of the movie as Japan has closed down major public places.

Even the US release date could be pushed back, as most of the Hollywood movies have been postponed to November or later over the fear of the COVID-19 outbreak. Demon Slayer: Demon Train Arc (Kimetsu no Yaiba: Mugen Ressha-Hen) is the full official title of the movie and a recent trailer by animation studio ufotable was released on YouTube.

Demon Slayer Infinity Train will show that Tanjiro has fully recovered in the care of Hashira and they are sent on a new mission with the demon slayer corps. The group will go aboard the Infinity Train of Dreams, a train that will take them to the dreams of demons. Tanjiro will be joined by Kyojuro Rengoku, Flame Pillar to fight the demonic spirit of the Infinity Train and protect the 200 innocent human passengers.

The cast members that have voice the anime characters will also return for thee Demon Slayer Infinity Train movie and it includes the following names.

Demon Slayer Infinity Train movie will adapt the chapter 53 to chapter 66 of the manga series Kimetsu no Yaiba by Koyoharu Gotoge. The movie will start from where the first season of anime ended, Tanjiro and his friends climbed aboard the Infinity Train to protect the passengers.

It simply means that the Demon Slayer movie is acting as a bridge between season 1 and season 2 of the anime series. Demon Slayer Season 2 anime will directly pick where the Infinity Train movie ends and continue the story forward. 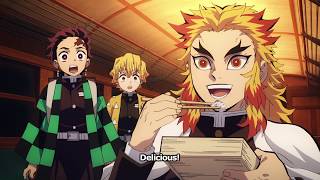