Cyberpunk 2077 release date might have been delayed but that doesn’t mean that the game details won’t come out. In fact, we have been hearing a lot of news about the gameplay and features of Cyberpunk 2077 recently. CD Projekt Red has taken a lot of famous celebrities to act as NPC in their upcoming open-world game.

Apart from Keanu Reeves, Cyberpunk 2077 has an NPC character portrayed by famous musician Grimes, who is also dating Elon Musk currently. Grimes has shared a lot of interesting details about her character Lizzy Wizzy along with several Cyberpunk 2077 gameplay information.

Cyberpunk 2077 soundtrack will feature songs and music from Grimes whose actual name is Claire Boucher. It was also announced that the singer will have more role in Cyberpunk 2077 gameplay and will act as the voice actor for NPC named Lizzy Wizzy. Grimes shared a lot of backstory details about her character in a livestream which is now deleted to cover the gameplay leaks.

My character in @cyberpunkgame !! 😛 hopefully they aren’t mad about my speech impediment when we start recording 😯 pic.twitter.com/XPi6q7jRcg

It was revealed that Lizzy Wizzy is a famous model who kills herself on the stage in Cyberpunk 2077 storyline. Grimes also confirmed that her NPC will be revived after an emergency surgery is performed on the same stage. Lizzy Wizzy then becomes a cyborg for the rest of the ‘Cyberpunk 2077’ gameplay and will guide your character on different missions.

Cyberpunk 2077 will have cybernetics enhancements playing a huge part in the storyline and main character V will have several such upgrades. In on the early Cyberpunk 2077 trailer, a full-cyborg celebrity is seen walking down the red market, fans are now expecting that it is the same Lizzy Wizzy character that Grimes has been talking about.

The game developers have already hinted that cybernetic customizations will be a huge part of Cyberpunk 2077 gameplay features and V’s skills and abilities. Cyberpunk 2077 release date has been delayed and the new date is September 17, 2020, as shared by CD Projekt Red themselves. 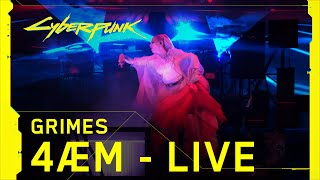