Crisis on Infinite Earths crossover on CW just ended with the fifth part as Legends of Tomorrow episode and finally, the saga has come to an end. It was the biggest crossover event in the TV history and had included DC characters from all sorts of media including the animated series and DC Universe movies.

However, the Crisis ending was so rushed and confusing many of the viewers couldn’t understand what was happening. Arrow has turned into Spectre and the big fight, rebooting the Universe and other stuff made everyone very confused. It is why he has explained the Crisis on Infinite Earths ending in simple terms and also answered the questions about Crisis Season 2 or whatever the next CW crossover is and its release date.

Crisis on Infinite Earths is a major event in the comic-book where every earth across all the multiverse was destroyed and the heroes saved it and all of them merged into one singular earth. Oliver Queen as Green Arrow died fighting the shadow demons and he was then given the role of Spectre who helped the seven paragons in defeating the Anti-monitor.

As a result, the heroes rebuild the Universe from scratch and since Flash was the one who connected everyone, all the Earths that he knew merged into one. It was also done to have Supergirl, Batwoman, Black Lighting, Superman, and other such characters on the same earth so that problems for future team-ups, crossovers, and traveling to parallel earth can be solved.

It doesn’t mean that there is only one Earth left, as Stargirl and Justice Society of America, Green Lantern, Titans, Swamp Thing, DC movie Universe, etc. still exist on separate parallel earths.

Crisis Season 2 or Next Crossover Release Date and Details

CW has already teased about the next crossover event and it will be very small-scaled compared to Crisis on Infinite Earths saga. There are also rumors that ‘World’s Finest’ event is adapted in which Supergirl and Batwoman will team up to take on their enemies.

THINGS THAT MAKE ME HAPPY: The Crisis on Infinite Earths finale was everything I wanted it to be and amazing things I didn’t know I wanted: Bebbo, Marv Wolfman, Sargon, Black Lightning’s reaction to his new reality and the Table of Justice. I’m positively giddy! 1-15-20. pic.twitter.com/ssbpN0kgxa

Given the rise of female superheroes in the CW Universe, there are also rumors about an all-female crossover. Crisis season 2 may not happen at this point, but the next CW crossover featuring some other event will be released around the end of 2020. 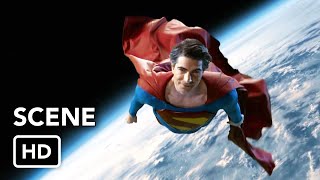