Brooklyn Nine-Nine Season 8 is awaited by the fans even though the season 7 is yet to get over. Everyone loves this sitcom and wants more and more episodes from the show. Brooklyn 99 has made its own place in the pop culture events and is one of the most popular TV shows out there.

West Coast, you know what time it is! The new episode of #Brooklyn99 starts NOW! pic.twitter.com/PH8QaFBlQq

It makes sense for the makers to renew Season 8 in advance so that there is not much gap between the two seasons. Here is everything you need to know about Brooklyn Nine-Nine Season 8 release date, trailer, cast, plot, spoilers and other updates.

Brooklyn Nine-Nine Season 8 release date is yet not announced but the show was renewed last November. The seventh season of the comedy series started to air from February 6, 2020, and the latest episode will release on April 23. It simply means Brooklyn 99 Season 8 won’t be coming out before 2021 for sure.

Also, the recent coronavirus pandemic has stopped filming for every major project and it can further delay the show. Fans are hoping that Brookly Nine-Nine Season 8 trailer is released at this year’s comic con just like the previous year with an early 2021 premiere date.

Most of the regular cast members will return in Brooklyn Nine-Nine Season 8 and here are some of the confirmed names:

Chelsea Peretti, who played the character of Gina Linetti won’t return for the 8th season and some new faces will make their way to the next installment of Brooklyn 99.

Brooklyn Nine-Nine Season 8 will also have the same format where the show will follow a team of detectives and cops in the fictional 99th district of the New York City police department. Raymond Holt is the team leader and Jake Peralta is the detective that always tries to be a hero. As for more accurate plot spoilers, Season 7 is still airing and hence it is difficult to predict things for Season 8, but it will involve a lot of comedy for sure. 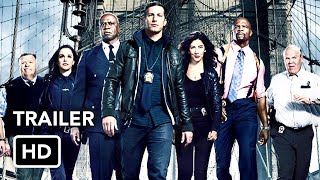