Bradly Cooper and Lady Gaga dating rumors are in full swing these days, and the recent performance almost confirms it. The recent live performance of the Oscar-winning song ‘Shallow’ at Enigma Vegas Residency was so romantic. Lady Gaga was there to perform on stage, while Bradley Cooper was sitting in the audience.

After a few minutes, Lady Gaga calls Bradley to come on stage and they sing the song together. Their chemistry was so intense that everyone in the audience believes that they are in love. Here are the top 5 moments which from the performance which proves that the actors are in a relationship.

As soon as Lady Gaga called Bradley Cooper on stage, the crowd started cheering. The actor was reluctant to join at first but accepted the demands of the fans. Lady Gaga came to the end of the stage herself and held his hand. Both of them were holding each other’s hand until they reach the main stage.

Looking at each other

When Bradley Cooper was singing, Lady Gaga just sat down and started looking at him like she was totally in love. One could totally see the intense romantic feeling in her eyes.

In a similar way, when it was the turn of Lady Gaga to sing, Cooper was just lost into looking at her. Even for a moment, he doesn’t look elsewhere, he was adorable just looking at her.

As soon as Bradley Cooper arrived on stage, Lady Gaga welcomed him with a tight hug. They came so close, and could totally see that it was not a friendly hug, it was something a couple in love does.

They could not take eyes off from each other during their entire performance. Bradley Cooper and Lady Gaga were acting like they are the only two persons in the entire stadium and seeing each other with a feeling of love.

Getting so close on Stage

While even performing, both of them couldn’t keep their hands off and were getting cozy. Bradley Cooper was totally leaning on Lady Gaga and resting his head on her shoulder. It only means one thing that the two actors are in love and dating each other.

No matter how much Lady Gaga and Bradley Cooper denies the reports of their relationship, the public could see the love in their eyes. The way they behave and act with each other is an indication that the ‘A Star is born’ actors are indeed dating. 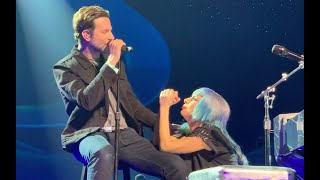