Boruto Chapter 46 will continue the fight between Jigen and Koji Kashin explaining why there is a revolt in the Kara organization. Amado shared a lot of information about Jigen with the Konoha people and explained that he has turned into an Ohtsutsuki who will destroy all the life on a planet to get its chakra energy.

Fans will also get to see the true identity of Koji Kashin in Boruto 46 manga chapter and the reason why he wants to kill the Kara leader. Jigen is aware of everything and he has his own plans which include Amado helping Kawaki to escape from the Leaf village. Here is everything you need to know about Boruto Chapter 46 release date, plot spoilers, predictions, theories, leaks, raw scans and how to read online the manga chapters.

Boruto Chapter 46 spoiler indicates that the manga issue will show more about Koji Kashin’s past and why he is attacking the Kara leader Jigen. Koji said that he has no interest in the chakra fruit and from the beginning, he was created to kill Jigen. Fans are confident that Boruto 46 manga chapter will show Koji’s full backstory and also reveal his creators.

Amado arranged a live show for Naruto, Sasuke, and Shikamaru in “Boruto” chapter 45 and treated them with the conversation between Jigen and Koji Kashin. The fight between the two Kara members will be amazing as the previous manga chapter showed their true skills. Koji Kashin used shurikens and shadow clones, whereas Jigen also teleported himself and we can expect more such amazing moves in “Boruto” chapter 46 as the fight continues.

Boruto Chapter 46 release date is set as Wednesday, May 20, 2020 as Boruto: Naruto Next Generations manga chapters are released on a monthly basis. The raw scans of Boruto 46 should be leaked online around 2-3 days prior to the manga release meaning around May 17, spoilers will be available on the internet.

Boruto: Naruto Next Generations, Ch. 45: Major reveals in this chapter that change everything! Read it FREE from the official source! https://t.co/IvFnNodSZn pic.twitter.com/poLK9h8Pio

However, we suggest all the fans to read “Boruto” chapter 46 free and legally on official Manga Plus and Viz Media apps and websites, which will help the creators. Also, the official English translation of Boruto 46 will be available on the official source without any hassle. 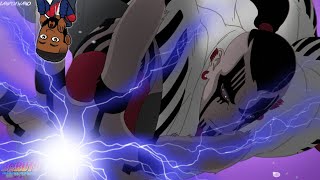