Boruto Chapter 44 will show the big and spectacular fight of Koji Kashin vs Jigen as the two powerful Kara members will clash. But more than that, fans are eagerly waiting for the next manga chapter as it may reveal the true identity of Koji Kashi. Everyone wants to know the backstory of this new Kara member who wants to become the new leader by killing Jigen.

The motivation and real identity of Koji Kashin will be explored in Boruto 44 manga chapter along with the fate of Boruto and the effect of karma seal powers on the fighter. Here is everything you need to know about Boruto chapter 44 release date, plot spoilers, predictions, theories, leaks, raw scans and how to read online the manga chapters.

Boruto Chapter 44 spoilers reveal that Koji Kashin was plotting to kill the Kara leader Jigen for a long time and he has now gotten a perfect opportunity. Jigen has been drained of his energy in the fight against Naruto and Sasuke and is now recovering at Kara HQ. Koji Kashin knows that he can never defeat Jigen in his full power and is rushing to fight the weakened Kara leader. Amada informed Koji that Jigen is at less than percent of his power which predicts that “Boruto” Chapter 44 will have a big fight between the two.

The manga is yet to explore the real identity of Koji Kashin and his motivation to kill the Kara leader. One of the most popular Boruto 44 theory predicts that Koji is one of the three Legendary Sannin, Jiraiya. It goes with the fact that Koji have Jiraiya’s Jutsus and abilities, such as toad summoning and Rasengan, the same technique which Jiraiya taught Naruto. Koji also knows about Konohagakure Sensing Barrier, which is only possible for those with Konoha blood such as Jiraiya. Boruto Chapter 44 will give more hints on the real identity of Koji Kashin and it may also reveal why he wants to kill Jigen. 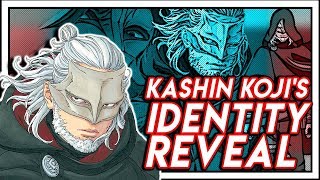