Boruto Chapter 44 will feature the legendary Jigen vs Koji Kashin battle between the two powerful Kara fighters. Even though Team 7 was successful in their last mission to rescue Naruto, it was hinted Boruto might be turned into the dark side using the Karma seal powers.

Boruto 44 manga chapter will show the new jutsus techniques as Koji Kashin and Jigen fights each other in one of the most hyped-up battles. Here is everything you need to know about Boruto chapter 44 release date, plot spoilers, theories, leaks, raw scans and how to read online the manga chapters.

Boruto Chapter 44 story will continue after the mysterious Koji Kashin arrives at the Kara headquarters and looks fully prepared for a fight. It has been revealed in previous Boruto manga chapters that Koji plans to betray the powerful leader of Kara and might try to kill the weakened Jigen. But that doesn’t mean that Jigen vs Koji Kashin fight in “Boruto” Chapter 44 will go one-sided as the leader knows a lot of fighting techniques.

Koji is known to use techniques such as Rasengan, Sealing Technique: Frog Suppression, Summoning Technique (Toad) and the True Fire of Samadhi. Meanwhile, Jigen has already displayed his skill in using Kama, Genjutsu Communication, Kāma Rift and Size Manipulation Technique. Boruto 44 will display a lot more Jutsu techniques as the two Kara fighters struggle to take control. Konoha villagers are happy that Team 7 has rescued Naruto without losing anyone but they are worried that someone might take over Boruto’s body using karma in Boruto Chapter 44 storyline. 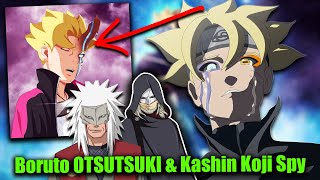