Boruto Chapter 43 will be amazing as Naruto will finally be rescued at the end of this manga installment. Fans of Boruto: Naruto Next Generation are very happy as the 2020 year has bought a lot of amazing things to the storyline. Sarada finally unleashed the Chirodi attack against Boro and could defeat the villain to rescue Naruto from his evil clutches.

Team 7 with the help of Sarada and Boruto will finally be able to rescue Naruto in chapter 43 of Boruto manga. Here is everything you need to know about Boruto chapter 43 release date, plot spoilers, theories, leaks, raw scans and how to read online the manga chapters.

Boruto Chapter 43 will be a total treat to Sarada fans as her character will do a lot of great stuff in this chapter of manga series. Sarada used the three-tomoe Sharingan move to determine the weak spot of Boro and was able to figure out that it can be moved from one place to another in his body. The favorite female character of every Boruto manga reader, Sarada was able to deduce that Boro can be defeated with a very fast ninjutsu attack on his body before he could understand what is happening.

Boruto Chapter 42 already hinted on Sarada choosing the Chidori move which was the best moment of the manga this month. While the previous chapter didn’t show Sarada using the power Chidori move, fans will only able to see her succeed in Boruto chapter 43 storyline.

Meanwhile, the new team 7 is on their mission to rescue Naruto who has been trapped on an unknown dimension and is struggling to stay alive. Even though the team 7 was able to reach the karma seal of Naruto, Boro is guarding the structure. Boruto, Sarada, and Mitsuki will improve their strengths and Sarada will finally use the power of Chidori to defeat Boro in ‘Boruto’ chapter 43.

Boruto: Naruto Next Generations manga chapters are released on a monthly basis and based on that Baruto chapter 43 release date is set as February 20, 2020. The raw scans of Boruto 43 should be leaked online around 2-3 days prior to the manga release. However, we suggest all the fans to read Boruto chapter 43 free and legally on official Manga Plus and Viz Media apps and websites, which will help the creators. 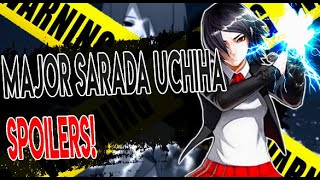