Now, Gearbox has announced the abilities of two more character known as Moze the Gunner, and she belongs to the Vault Hunter class.

While analyzing her skill tree, we found out that she has been created as someone who can put the enemy units under constant pressure.

Moze the Gunner has a giant mech Iron Bear at her disposal which can help her in dealing a massive amount of damage to the enemies. 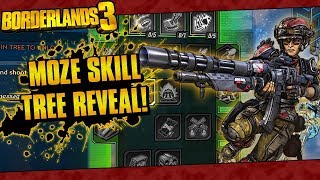 According to Polygon, the reputation of Moze will depend on how players will play her. Initially, she appears to be a character that is overpowering if right combos are unlocked.

Her ability to increase the damage of a weapon while decreasing the rate of fire is an important ability, and it can change the way players deal with enemies. This ability allow Moze to use her minigun for a prolonged period as the gun tends to heat if used continuously.

Moze is made for the players who like to play in a run and gun style.

A new DLC for Borderlands 2

Meanwhile, Gearbox has released a DLC expansion for Borderland 2. This DLC will increase the level cap from 72 to 80. The expansions also bring a set of new skins and area, a raid boss and much more.

According to the developers, this DLC is designed to act as a bridge between the current and upcoming title Borderlands 3 while bringing new content to Borderlands 2.

This new DLC expansion will cost you $20, and it will be free for the players who have brought The Handsome Collection or Borderlands 2.