Instances of total lunar eclipse occur several times each decade. During this time, the moon appears blood red and very close to our planet Earth

The reasons as to why this change to Blood red color of the moon are being explained below.

When does total lunar eclipse occur?

A total lunar eclipse is said to occur when there is movement of moon through the innermost shadow of the Earth. It can be witnessed across the globe that too for hours.

Despite the movement of moon through the shadow of the Earth, it does not get dark. What really happens is that the moon apparently becomes rusty orange to dark red in color.

Reason for the Blood Moon’s Color

The main reason for this change in color of the moon is because of the light that passes through the atmosphere of the Earth.

According to the Director of Astrobiology, at the University of Columbia, Caleb Scharf, the red component of the white light which is referred to as the sunlight gets filtered preferentially.

This red component of the white light is then diverted into the shadow of the Earth. This diverted component is what illuminates the moon which is eclipsed thereby making it appear blood red in color.

Read more:  Does John Wick Chapter 3 have an after credits scene?

There is another way to explain this phenomenon of change in color. In this, one has to consider himself/herself standing on the surface of the moon during the time of total lunar eclipse.

During total lunar eclipse, on looking at the Earth, this person would then witness each sunset as well as sunrise which is happening on the Earth at the same time.

It is because of this dark red color obtained from the diverted red component of light that the moon appears blood red.

And it is because of this color that the moon gets its nickname of being “Blood Moon” during the lunar eclipses. 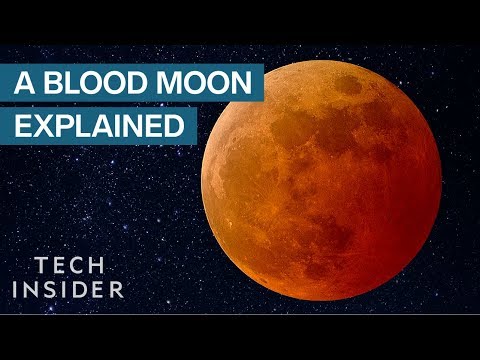