Apple has confirmed to release the iOS 13.2 version for the latest iPhone 11 and other newer models. The makers have decided to skip iOS 13.1.3 and iOS 13.2 will be the next update over version 13.1.2 Apple OS software. Most of the iPhone users are waiting for this latest update so they can upgrade their phones. While the beta version for iOS 13.2 is already out, here are the details about the release date, time, new features and jailbreak information for the official version.

Apple is already rolling out the beta program for iOS 13.2 version for the beta users. If you want to test out iOS 13.2 on your iPhone, you just need an Apple ID and you can download the beta iOS 13.2 for free. But there is a catch, the beta iOS 13.2 will be full of bugs and errors which could seriously affect your device performance. So, if you are willing to take a risk for trying out new features, then only install the iOS 13.2 beta on your Apple device.

Apple has not announced an official release date for the iOS 13.2 version but it should come around late October or early November. While the release date for iOS 13.2 is not fixed, the release time is always the same. Apple generally releases its new iOS versions at 10 am Pacific time. It means 1 pm in Eastern time, at 12 pm in Central time and 6 pm in London time.

Our best look yet at the AirPods Pro design based on the leaked icon found within the iOS 13.2 beta. Renders from @PhoneIndustry_ pic.twitter.com/FbbBUMSsPm

iOS 13.2 – Deep Fusion
The difference is in the details pic.twitter.com/Jv4cNSJm2A

Is Jailbreak Possible in Apple iOS 13.2?

Apple has been trying hard to stop jailbreaking for their iPhones and iOS 13 has been so far almost true to that effort. While many hackers claim to jailbreak iOS 13, it will be much harder for iOS 13.2 version. It has become very difficult to jailbreak Apple products which run on iOS 12 or higher. 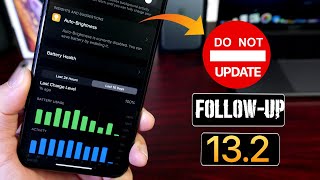