Apex Legends Season 4 is coming up very soon and fans of this battle-royale game are very excited. The current version of Apex Legends Season 3: Meltdown will end of February 4 and it means the new season will start soon. Respawn has not officially announced a release date, but there are lots of leaks and rumors for season 4 of Apex Legends floating around the internet.

The original plan of Respawn Entertainment was to start Apex Legends fourth season in December 2019, but Meltdown was extended into the longest season due to its immense popularity. Here is everything you need to new about Apex Legends season 4 release date, rumors, leaks, updates, title and more.

Apex Legends Season 4 will come with two Legends instead of one, Forge and Revenant according to the rumors. Forge is a melee-focused character with high damage abilities and moves and it is not sure both the Legends will come at the same time or will be spread across the fourth season.

Loba could also be introduced in Apex Legends 4 after Revenant and she is a translocating thief who uses stealth as her battle advantage. Apex Legends season 4 will also introduce new hopups (Catalytic Port, Double Tap, Incendiary Chamber), new ammo (Sniper Ammo) and a new weapon (Assimilator) as per the leaks.

Apex Legends Season 4 release date could easily be February 4 due to a number of reasons. Respawn launched the Apex Legends game on the same date in 2019 and what could be better than the 1st anniversary to come up with a new season.

Also, the gap between the two seasons of Apex Legends is getting closer and last time it was launched the same day as the previous season ended. The fourth season of Apex Legends will be launched most likely on February 4, 2020, and as for the title it has not been revealed yet. 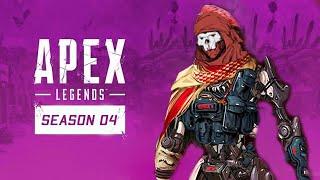