Apex Legends Mobile game is now confirmed and the title is coming for iOS and Android devices soon. While there are no official updates from EA and Respawn Entertainment, industry insiders and analyst are almost sure about Apex Legends releasing on smaller screen devices.

EA is rumored to be working with one of the Chinese gaming company to launch Apex Legends mobile for a global release. Here is everything you need to know about Apex Legends mobile release date, supported devices, countries and new gameplay features.

Apex Legends mobile version is rumored to be a collaboration between EA and Tencent just like the other battle royale games. Every iPhone, iPad and Android smartphone that can play PUBG and Fortnite will be able to run Apex Legends smoothly. Although Nintendo Switch won’t support the smaller version of Apex Legends, that can be changed in the near future.

Electronic Arts has confirmed they're working with a partner in China to create a mobile Apex Legends that will be released globally.

For reference. Activision worked with Tencent for Call of Duty Mobile. Blizzard partnered with NetEase for Diablo Immortal. pic.twitter.com/oCJzlsksi3

The announcement of the news that Apex Legends is coming on mobile platforms was done with the launch of season 4 trailer, which is also the same date when the game was first released in 2019. It is not fixed whether Apex Legends mobile version will release in China at first or every major country at the same time, gamers might have to wait for the end of 2020 or even 2021 for the launch as the release date hasn’t been mentioned in any of the reports.

Apex Legends mobile will be similar to all the battle royale games where a fixed group of players are tasked to kill others until a single user or his team survives. The game would be available for free on App Store and Google Play Store and in-app purchases will be available for items, cosmetics, hero characters. But none of the purchases can interfere with the game competition and it will only improve the looks and aesthetics of the mobile version of Apex Legends which could be launched very soon. 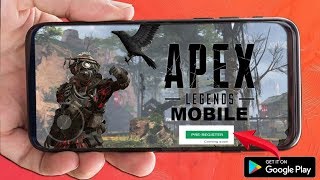