Which horror movie scared the hell out of you as a kid? We are asking this because Twitter users have been sharing the movie name by using the hashtag #StillScaredDammit.

Below are some shows and movies that still send horror fans into hysterics.

Mrs. Massey Left A Lasting Impression In ‘The Shining’

‘Poltergeist’ Turned People Off Of Steak For A While

I'mma be real, this movie is one of like 5 reasons why I can't drive without having an anxiety attack. #StillScaredDammit pic.twitter.com/qFx0aKLjeD 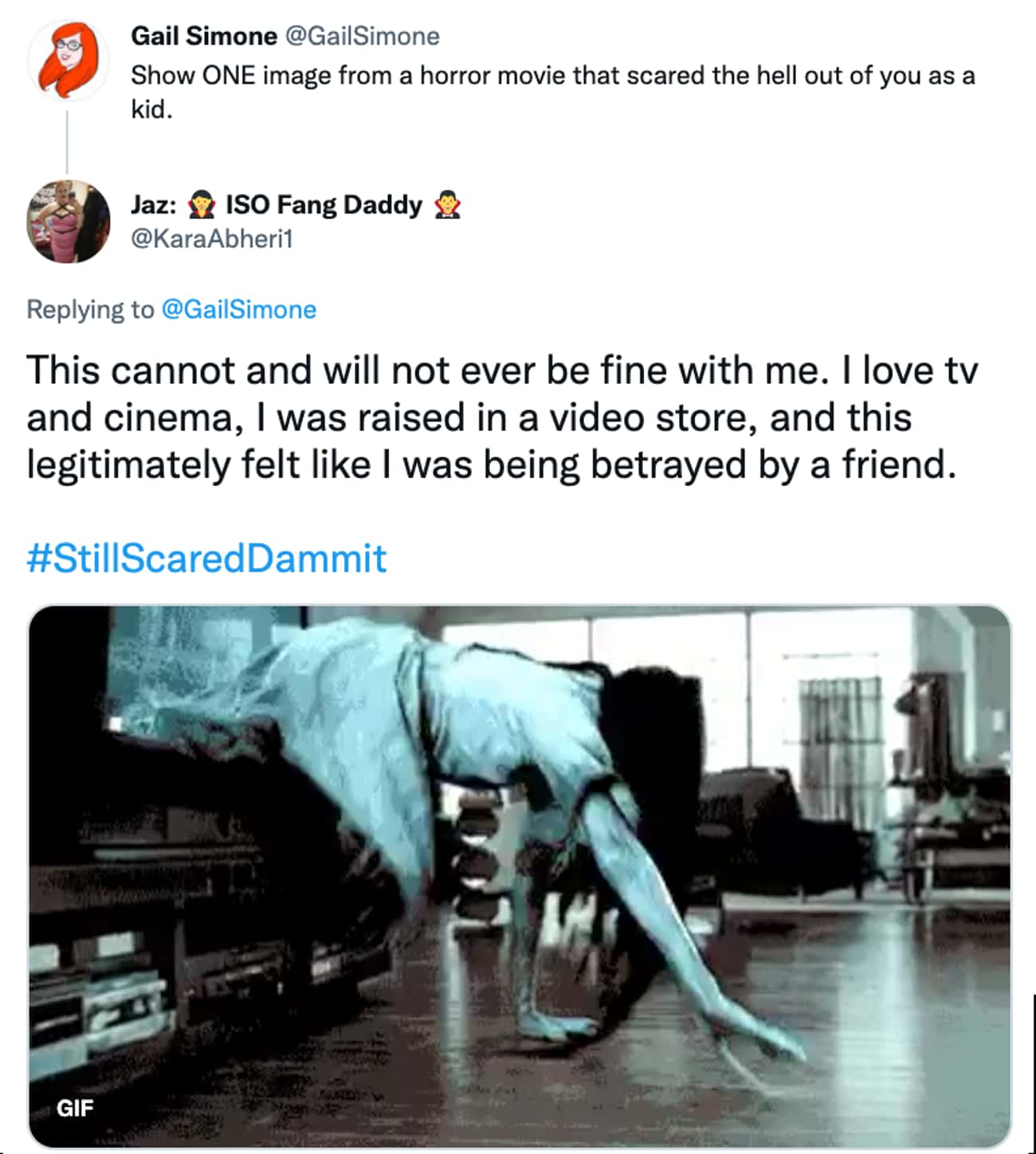 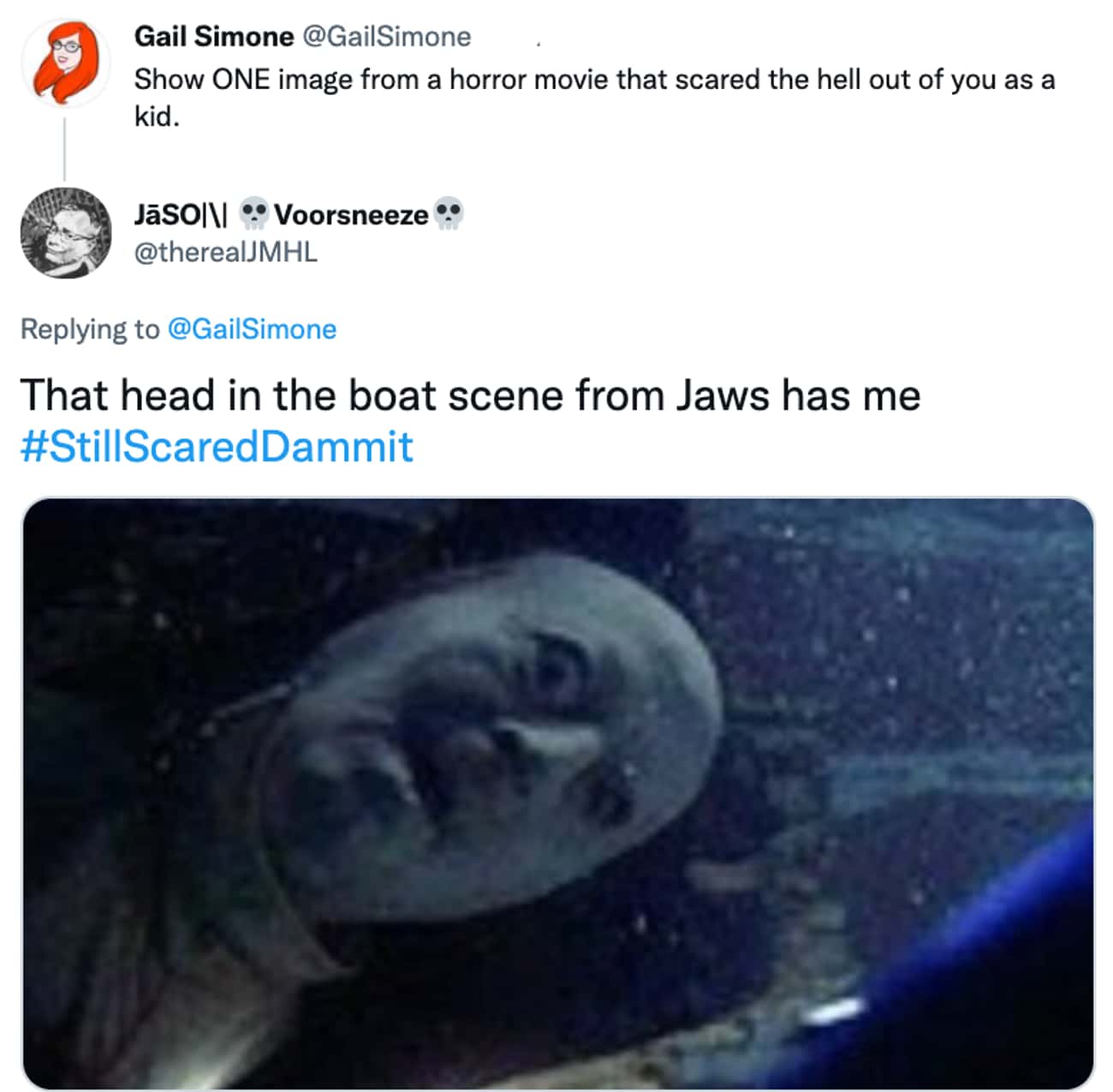 I don't even need to go to horror for this one. #StillScaredDammit pic.twitter.com/nXxmRxASC2

The Buggy Chapter From ‘Creepshow’ 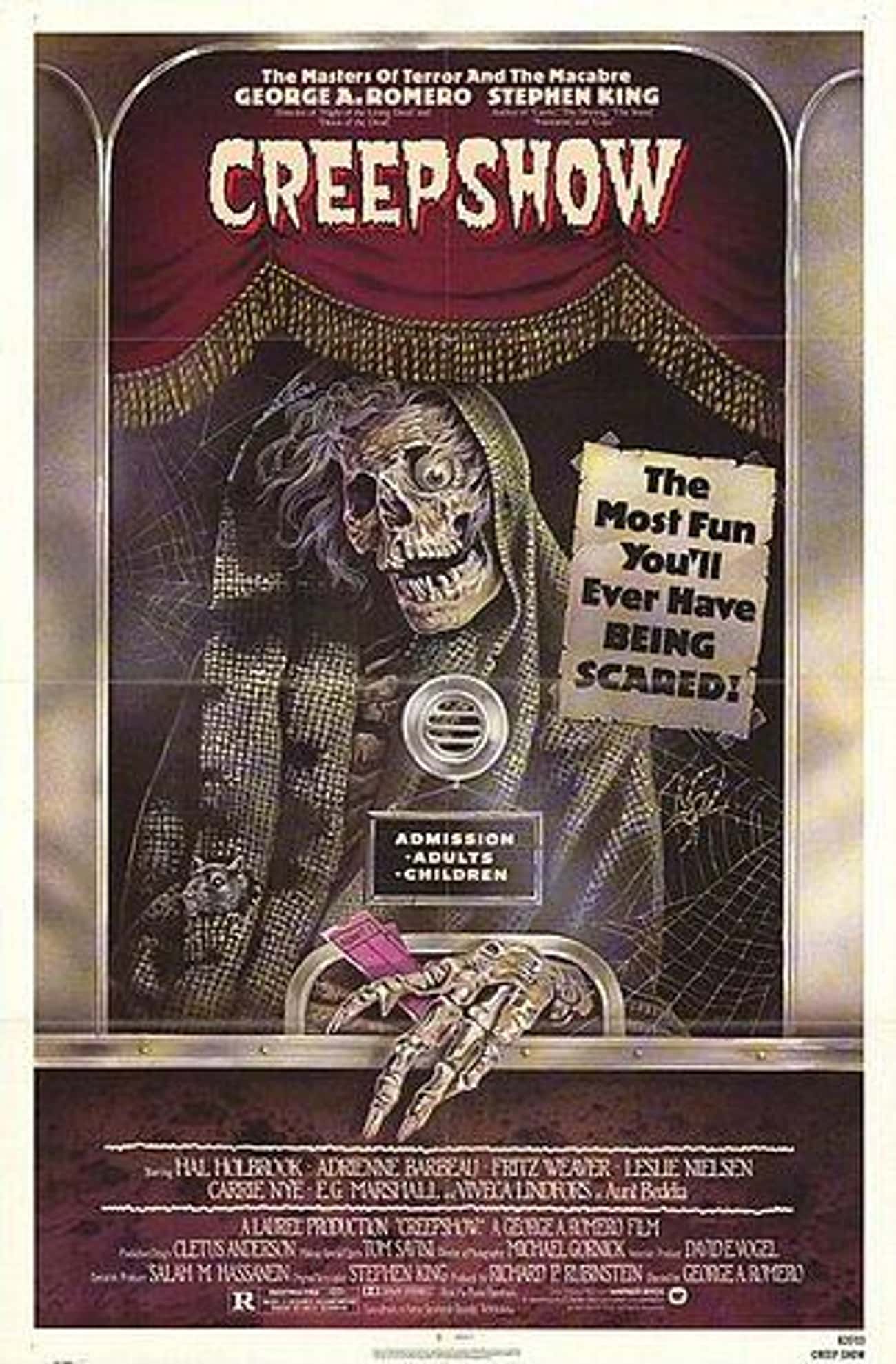 This Terrifying Moment From ‘Mr. Sardonicus’

‘This Bastard’ From ‘Trilogy of Terror’ 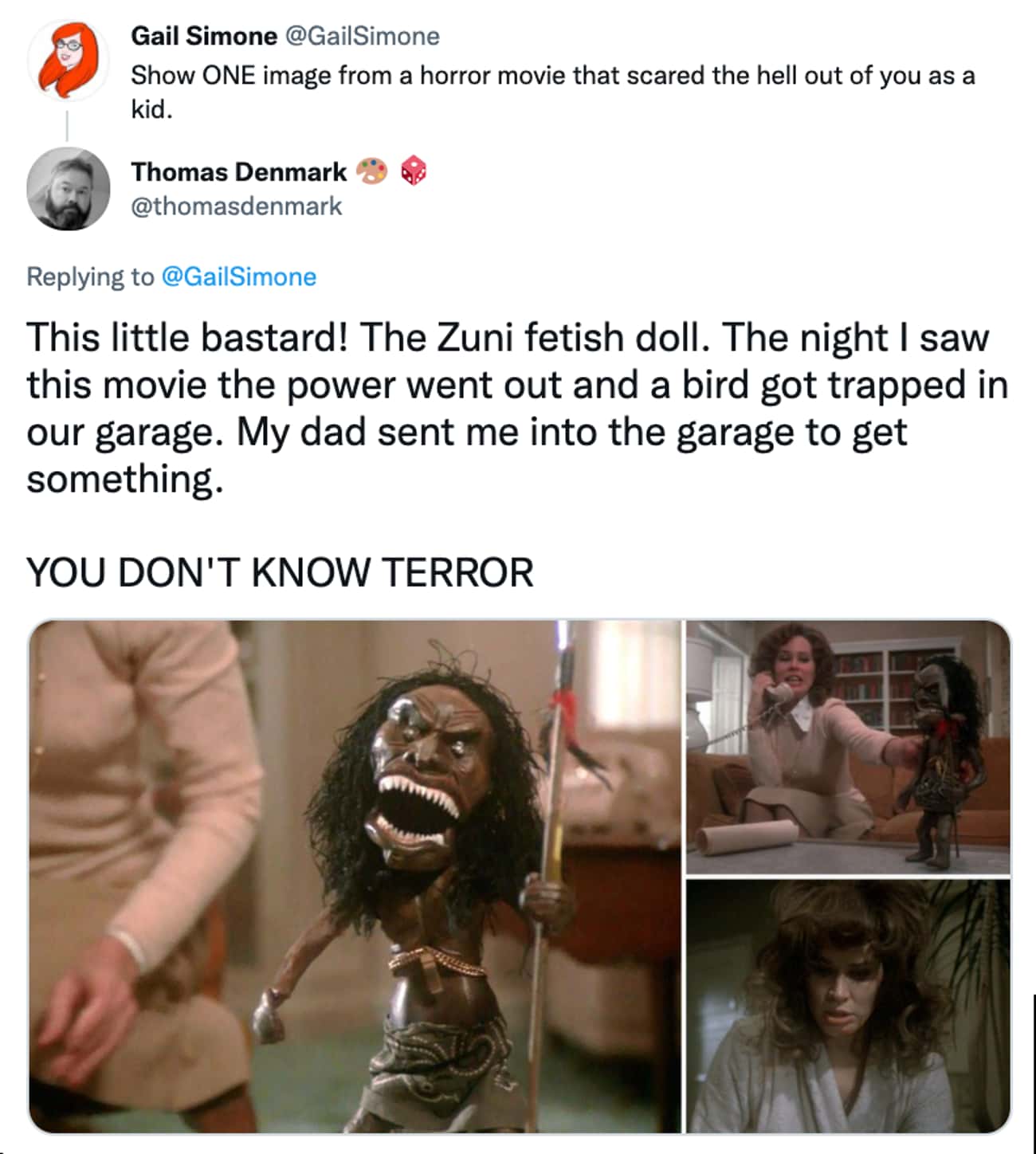 I don’t remember the other 2 parts of Trilogy of Terror, but this wee bugger scared me spitless. pic.twitter.com/Ks1zav4reu

‘Poltergeist’ Kept An Entire Generation Away From Pools 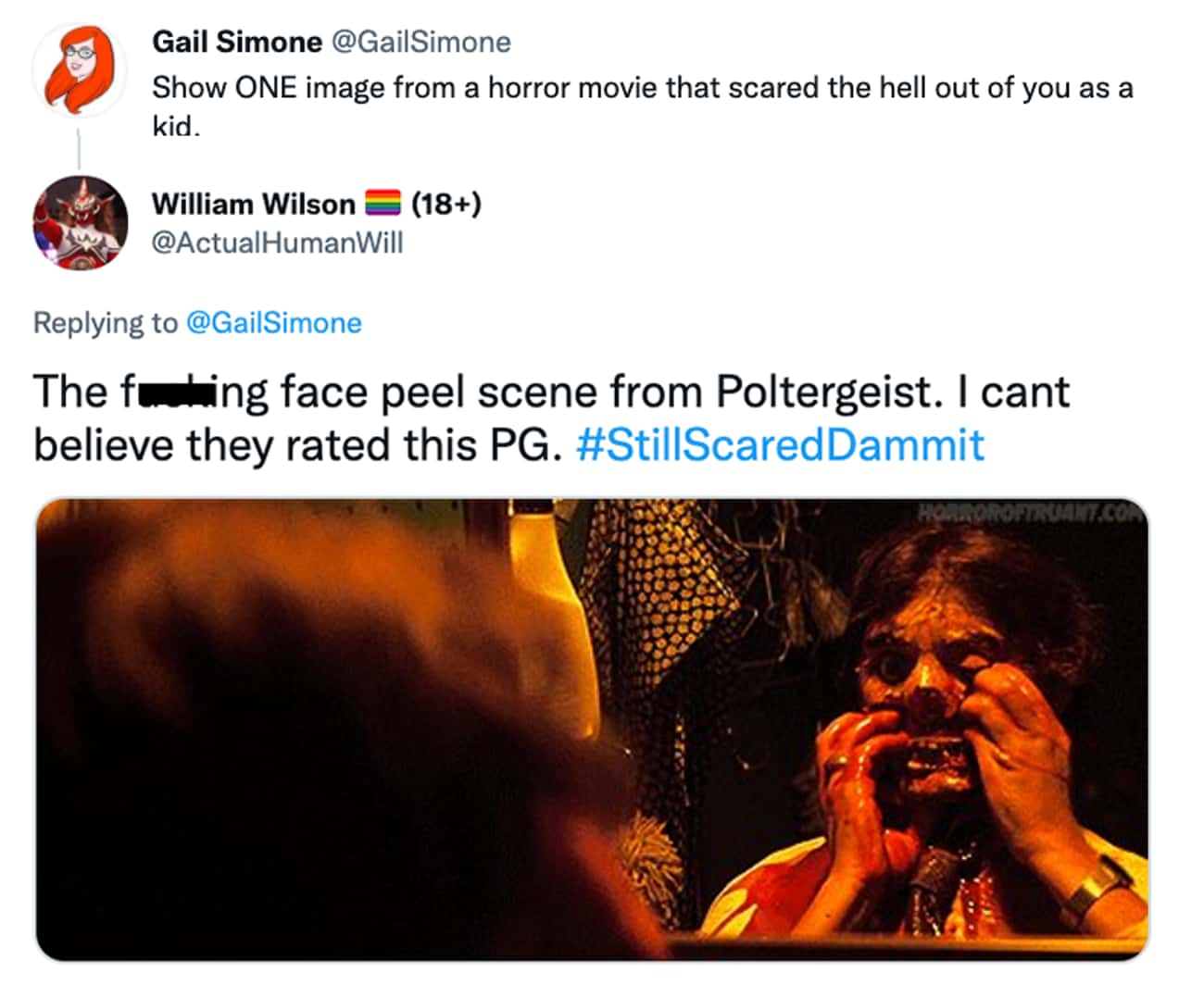 Spider Head From ‘The Thing’

One of the reasons I hate spiders to this day. #StillScaredDammit pic.twitter.com/YFaRR0TIGG

Roger The Dogman From ‘The Shining’

I'm not even sure why this particular scene sent a jolt of fear through me, given the rest of what was happening in the movie. pic.twitter.com/RpzyCZuAIc

It's the way it's framed, in part. There's stuff behind the doorway you can't see, there's stuff that's hidden, but they can see you. The one guy you expect a human face and it's an animal face, it's a twist on your expectations. And there's the frisson of sex.

People framed off-center in doorways and hallways and stuff is so, so good and off-putting, kind of destabilizing. Sometimes I think it's not used enough, because it's so effective, and other times I'm glad it's not used more because that might make it less effective.

In a movie filled with "WTF" imagery, this one was the most "WTF" of all, might be why.

The Lipstick Demon From ‘Insidious’

#StillScaredDammit this scene terrified me as a kid, and when I rewatched the movie recently it still got me. https://t.co/lv5aOS5cBj pic.twitter.com/Thwd7mBMnj

‘The Blob’ Still Makes Us Reach For The Ice

Seeing this as a young kid back in the early two thousands was a fuckin’ trip man. I was so scared that I started dumping ice cubes into the sinks every night to stop the blob from coming to get me pic.twitter.com/CHPiKmTgcY

A Bad Decision Regarding ‘A Nightmare on Elm Street’

Picture this- it's the 80's. I'm in either kindergarten or 1st grade. I'm at a sleepover birthday party at a karate school. It's about midnight. And the parents decide to put this on- FOR THE KIDS. #StillScaredDammit pic.twitter.com/xDL27cFhdm

I had trauma from seeing this film when I was 8. I had been fine with Friday the 13th and the Halloween franchises, but Freddy… I ended up in therapy, slept with a lamp on, music playing, closet door shut. I’d sleep in my little brother’s room to feel safe.

I got better, lol.

The ‘Secret Garden’ Behind ‘Motel Hell’

The Jump Scare From ‘The Exorcist III’

This was neither the first, nor best, nor scariest horror scene I ever saw.

But it has never left me. No music. You're just staring down this hospital hallway for long tense minutes. Nothing much is happening, and you get so focused on the watching, until…#StillScaredDammit pic.twitter.com/0ERQfGH5sq

Exorcist 3 is a banger and people sleep on it. The formula for this jump scare is so perfect, from the patient yelling (which might make you jump higher than the actual jump scare) to hitting you right when you relax again.

Also Brad Dourif is the GOAT!!

Clarice Meets Buffalo Bill In ‘The Silence of the Lambs’

First proper horror I saw as a teen, and to this day I cannot stand hearing the voice of the Buffalo Bill actor. #StillScaredDammit pic.twitter.com/XOtxZtuRqt

‘The Ultimate Jump Scare’ From ‘The Lord of The Rings’

‘Thriller’ Was A Chiller 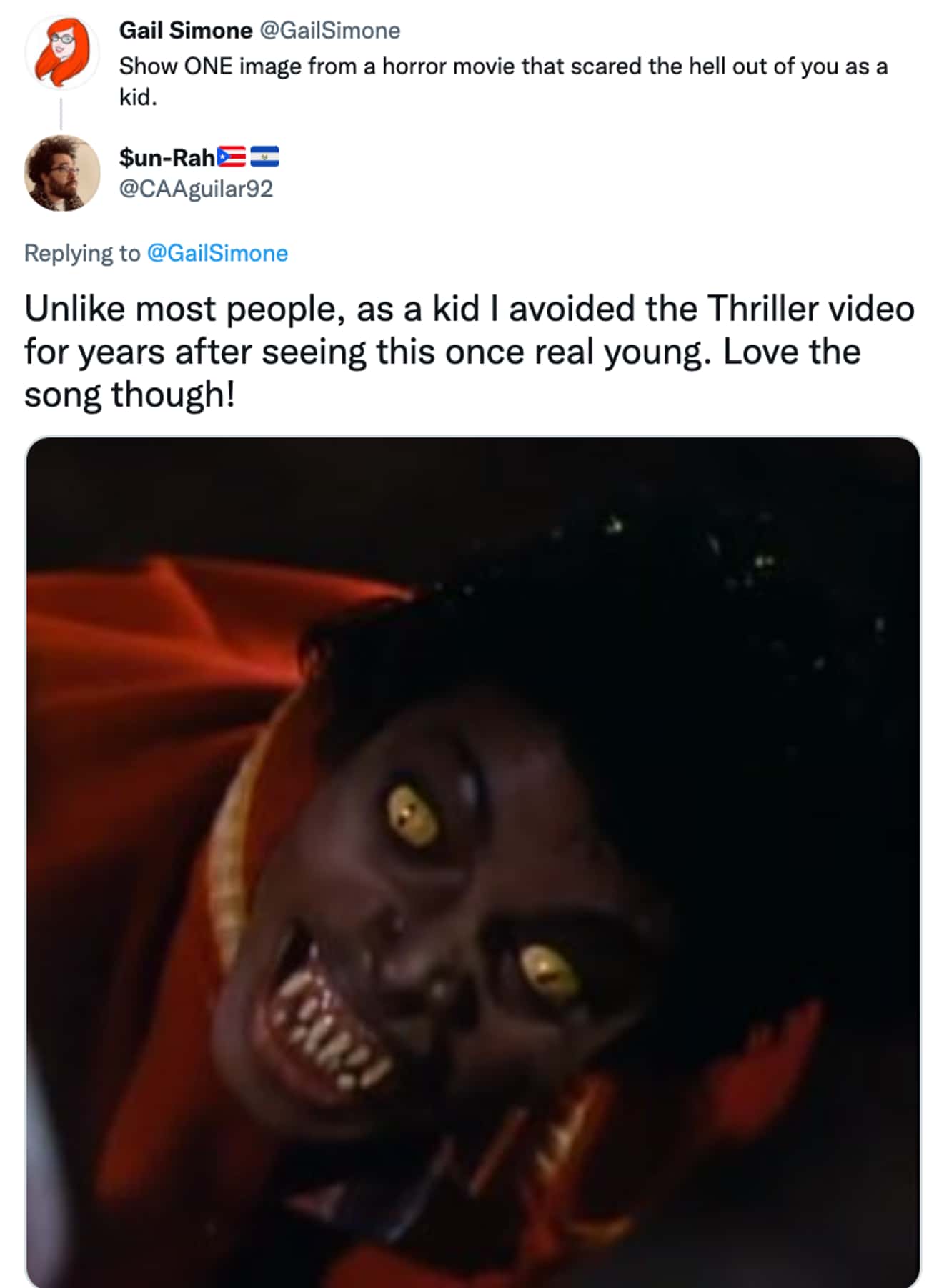 To this day I have never watched “thriller” bc I walked in on this shot when I was like 4. #StillScaredDammit pic.twitter.com/uEtVUPOjpc

Whatever The Hell This Is From ‘Cat’s Eye’

This thing in Cat's Eye scared the crap out of me as a kid! #StillScaredDammit pic.twitter.com/kuF5to7jXt

This Jump Scare From ‘The Strangers’

All Of ‘Jeepers Creepers’

This was the first horror movie I ever watched I was around 6 yrs old #StillScaredDammit pic.twitter.com/orTaUjSFLr

The Helping Hands From ‘Labyrinth’

Maybe not a horror movie but the Labyrinth really messed me up as a kid, especially the Helping Hands scene. #StillScaredDammit pic.twitter.com/IGsXWOR9aV

I love labyrinth but it does veer into terrifying sometimes especially these guys pic.twitter.com/nZeTSlhwbS

‘Ghostwatch’ Scared (And Scarred) A Whole Generation Of Brits

Every Brit of a certain generation, I presume, is like me. #StillScaredDammit pic.twitter.com/tVb7Cgi4Y3