Ozark Season 4 release date is something every fan of the series is waiting ever since Season 3 has premiered on Netflix. Fans have already binge-watched the third season of the crime drama series released on March 27 and available to stream on Netflix. There is no official renewal of “Ozark” Season 4 but the creators are confident that the streaming giant will make more episodes of the show as it has become hugely popular.

What an incredible actor. We know an Emmy is in the bag for Tom Pelphrey! #Ozark #Ozarkseason3 #Netflix pic.twitter.com/gJKhMbwqg1

It will be exciting to see in Ozark Season 4 what happens to Marty Byrde and his wife Wendy after the whole family is involved in the money laundering business. The fourth installment of the Ozark TV series will deal with the FBI watching the growing family business and how the Byrde couple deals with everything. Here are more details on Ozark Season 4 release date, Netflix renewal status and the possible delay in filming due to the Coronavirus pandemic.

Ozark Season 4 production will start as soon as Netflix renews the show via an official announcement. However, there are reports that the fourth season of Ozark is already in works as it has gotten an advance renewal from the streaming giant. Jason Bateman, the main star and executive producer of the drama series shared some important details on Ozark Season 4 renewal and production status.

i just finished OZARK SEASON 3
WHAT A SHOW!! one of the best netflix series, can't wait for season 4 pic.twitter.com/KAYuwSZVvL

Bateman told that Netflix generally waits for two to four weeks to collect user ratings and audience numbers so that it can decide the future of any project. Chris Mundy, the showrunner is already working on how the fourth season will go once it is officially picked up. It means Bateman and Mundy are already brainstorming ideas for Ozark Season 4 plot story and it will be renewed soon.

Ozark Season 4 release date could be around late 2021 or even 2022 depending on when the filming starts. The production work and shooting of every Netflix project is halted and delayed due to the ongoing Coronavirus pandemic. Jason Bateman also said that Ozark takes more than a year for filming process. It means that even if the filming starts later this year, Ozark Season 4 will only premiere in 2022 or later. 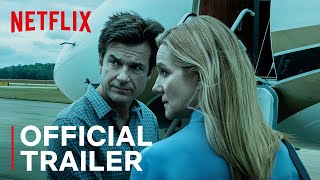