One Piece Chapter 976 will start the great Wano War between the alliances of Luffy and Kaido. Luffy will be joined by Law, Kid, Scabbards, Kyoshiro (real Denjiro) whereas Big Mom has joined hands with Kaido and his beast pirates. But that might not be enough for the Straw Hats leader and One Piece 976 manga chapter will show more people joining the war.

One Piece Chapter 976 spoilers and predictions say that Luffy, Law and Kid will be having a hard time working together as the powerful fighters are too egoistic. Denjiro who has taken the identity of Kyoshiro has brought 1,200 more warriors making the total force to 5,400. But that won’t be enough to defeat the combined army of Kaido and Big Mom which have 30,000 men.

Luffy will need more help in One Piece 976 manga chapters and fans are hoping for Jinbe to return and join the alliance. There are also fan theories that Katakuri will arrive in Wano at the correct time and save Luffy and the alliance. The manga story is never too simple that things go smoothly and it will be very interesting when Jinbe and Katakuri save the day in One Piece Chapter 976 and helps Luffy in the battle against Kaido.

One Piece Chapter 976 release date has been delayed by one week and it will now release in stores on Sunday, April 5, 2020. However, the raw scans for the manga will be leaked online 2-3 days prior on the internet around April 2 and fans will start discussing the spoilers of One Piece 976 over Reddit and other social media platforms. 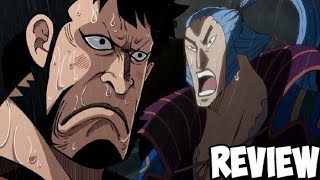