Dragon Ball Super Chapter 59 raw scans are leaked on the internet and a lot of spoilers for the manga issue are already out. Goku vs Moro fight will finally take place and both the fighters will use some amazing new powers. Goku has learned to activate the Ultra Instinct “Omen” power from angel Merus and will use it against the wizard Moro.

The spoilers for “Dragon Ball Super” chapter 59 show a very powerful fight of Goku vs Moro and fans will be amazed to see their powerset. Here is everything you need to know about Dragon Ball Super Chapter 59 release date, time, plot spoilers, predictions, raw scans leaks and ways to read the manga online.

Dragon Ball Super Chapter 59 leaks show that Goku and Moro fight will start and everyone will be amazed by it. Moro will be impressed by Goku’s skill to master the technique of Gods in such a short time. Goku will be the first to attack Moro using Ultra Instinct in Dragon Ball Super 59 manga chapter with a long-range attack. Piccolo will explain to Jaco that Goku was able to hit Moro without moving his position by some form of wind pressure attack.

Moro will fight back by using Ki attacks but Goku will defend them easily, but the wizard will restraint his movements by casting some energy form. Goku will finally unleash his signature move Kamekameha in “Dragon Ball Super” chapter 59 while activating the Ultra Instinct form. But Moro will taunt Goku that he won’t be taken such easily and the fight will continue.

Dragon Ball Super Chapter 59 will release in manga stores on April 20, 2020, as announced by V-Jump magazine. The latest chapters of Dragon Ball Super manga series are released on a monthly basis on the 20th of every month. The raw scans for Dragon Ball Super 59 are already leaked out on the internet and fans are discussing the spoilers for the manga chapter over Reddit and other social media platforms.

Dragon Ball Super Chapter 59 will be available to read for free on MangaPlus and the Shonen Jump app and other official platforms as a part of V-jump magazine. Hence, one must read Dragon Ball Super manga chapters from the official sources as it will help the creators. 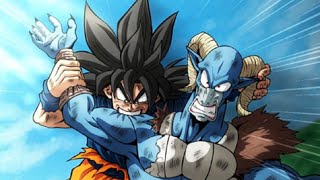