Apple Airpods 2 are great earbuds, and there is no doubt in that, but again there are so many better options. The wireless earphones are not much of an improvement over the previous version and have the new charging box as an addition. While the box is handy to extend the battery life of Airpods 2, it defeats the whole purpose of being free from the boxes.

At the same time, it costs a whopping $200 for a normal quality call sound use. It is the main reason why people are looking for Apple Airpods 2 alternative and there are so many of them. Gear Icon X, Bullets Wireless 2, Powerbeats Pro, Sony WF-1000X, etc. are some of the best alternatives that you can buy in 2019 instead of the same old Airpods 2 from Apple.

Samsung Gear Icon X at just the price of $130 are one of the best wireless earbuds with the great build quality. They are small, fits perfectly into your ears, and can be used even while doing exercise and workouts. The best part is there are three color options: black, pink, and white, which the Airpods 2 basically lacks as they only come in white. The sound quality is far better than earphones in this range, and the battery life is also decent.

Powerbeats Pro and Airpods 2 are both owned by Apple, and yet there are so many differences in the two earbuds. The reason behind is a separate working team, and the former comes under Beats by Dre, and they make some amazing sound devices. The design quality is great, fits perfectly in your ears, and have even around 5 to 6 color variants. Powerbeats Pro has a great battery life and is mostly used for heavy workouts; the only drawback is that they cost around $249.

OnePlus Bullets Wireless 2 are different from most of the wireless earbuds as they come with a neckband. While it feels like extra baggage to some of the users, the band helps in maintaining an amazing grip and feels safer than the Apple Airpods 2. In terms of battery life and build quality, they are better than the Airpods 2, but the sound quality is kind of average. The fact that Oneplus has only priced the Bullets Wireless 2 at just $99 is a big factor to chose them over the Airpods 2.

In terms of music quality, there is no match for the Sony WF-1000X, and they are at the top of the list. It has a nine hours battery, feels comfortable in the ear, and comes with extra covers. The added mic in the Sony earbuds can also control Siri and hence is an excellent alternative for the Apple Airpods 2. Sony WF-1000X earphones are also great in running and jogging and cost the same $200 as the Airpods 2.

Initial verdict on the Sony WF-1000X earbuds – they stick out a bit more than I'd like but they're very comfortable and sound is EXCELLENT. No connectivity issues yet. Nice they use the same app as my XM3s, microUSB is a bit annoying. Eagerly awaiting v2? 😀 pic.twitter.com/MbM9ndn5OQ 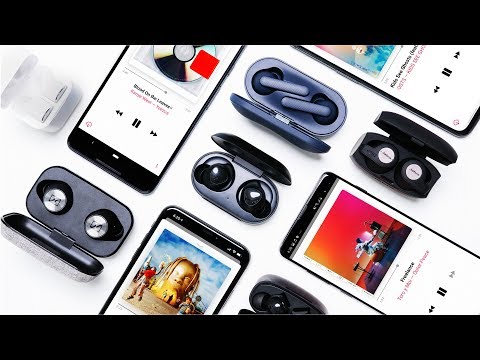