NFL 2020 draft may have been affected by the Coronavirus pandemic but it doesn’t stop the rumor mill. The major league events will happen in the upcoming weeks and a lot of rookie prospects will get drafted in NFL teams. It is why New England Patriots will be looking to reinforce their offensive department after the departure of Tom Brady from their team. Also, the Cleveland Browns are actively looking at the free-agent market to sign Jadeveon Clowney for their defensive end.

Tom Brady leaving the New England Patriots was the biggest news of this NFL offseason. The quarterback played almost two decades with the Patriots and won six Super Bowls with the team. Jarrett Stidham and the recently signed veteran Brian Hoyer are the other quarterbacks in New England, but every football fans know that the Pats will need some reinforcements if they want to perform better this year.

James Morgan is one of the top QB prospects for the Patriots and they have used their pre-draft calls on the rookie. The 23-year-old quarterback from Florida International University is not in the top seeds of NFL 2020 draft predictions but he has captured the attention of scouts very well with his good performance. Morgan was the key player in East-West Shrine Bowl and made 9/14 passing, 116 yards, and 1 touchdown resulting into a victory for the East team.

Jadeveon Clowney is one of the biggest names that could be signed in the upcoming NFL free agency. There are reports that Miami Dolphins offered him a $17 million one-year contract, but the three-time Pro Bowl player turned it down for a better team.

From @SportsCenter earlier: Cleveland Browns have shown interest in Jadeveon Clowney, and some people around league believe Cleveland got closer with Clowney than other suitors, though nothing ultimately happened from recent talks. Seattle's offer hasn't been what Clowney wants.

Cleveland Browns are the next team to show interest in Jadeveon Clowney and the defensive end is showing a positive response. It seems that Clowney is not interested in the offer from Seattle Seahawks and wants something more. 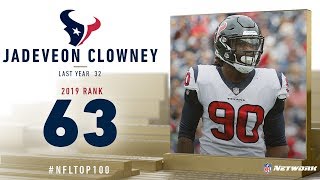