The current first lady of the United States Melania Trump formerly worked as a fashion model. She was associated with agencies in Milan as well as Paris. In 1996, she finally decided to move to New York City.

It is not a surprise that her career was associated with Trump Model Management along with Irene Marie Models.

Today, Melania Trump is married to one of the most well-known men in the US.  Donald Trump is the 45th president of America.

The former-model is originally from Novo Mesto, the Yugoslav republic of Slovenia. However, due to work, she has spent most of her adult years away from home.

To the children of America, in these difficult times, I encourage you to try and make the best of your day. Together with kindness and care, we will get through this temporary but tough time. pic.twitter.com/VhyCpzCr5b

Today, Melania Trump is one of the richest women. However, one might think she became rich only after marrying Trump. Unpredictably, Melania Trump was already rich before the marriage. Her modeling career was pretty grand and she worked hard for it.

United States of America’s First Lady, formerly a supermodel, also worked as a designer. She began her modeling journey merely as an 18-year-old. Her modeling career led her to travel a lot.

Before moving to America, she spent the majority of her modeling years in Milan and Paris. It is no secret that formerly known as Melania Knauss has been on several magazine covers.

The fashion magazines featuring her include Vogue, Allure, Vanity Fair, Glamour, NY Magazine, Harper’s Bazaar, Self, In Style and many more.

In fact, according to Express’s reports, Melania had her jewelry collection which was called Melania Timepieces. Later, it came to be known as Melania Skin Care Collection.

Her jewelry collection was exquisite. Each piece from her collection cost up to $200. The jewelry is was sold on an online platform called the QVC online shop. Moreover, All the popular, luxury departmental stores sold products from her very successful skincare line.

In 2001, Melania Trump also appeared on the screens for a movie called “Zoolander” as herself. Furthermore, she also starred in a television series called “The Apprentice” from 2004 to about 2015.

Self- Made Net Worth

According to Celebrity Net Worth, America’s first lady, Melania Trump used to earn a net worth of about $50 million all by herself.

However, Melania Trump had to put a hold on all her ongoing and successful ventures after she became the first lady of the U.S. 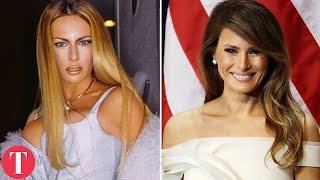