The Indian investors are totally unfazed by downfall in currency and troubled lender crisis. In fact, statistics show that there was a rise in investments by the Indians last month.

The Association of Mutual Funds in India have recorded that in September, around $1.5 billion was invested which is the highest since May and much higher than 83 billion rupees that were invested in August.

The Indian equities which were the top performers of Asia sank last week due to a surge in oil prices. It may further affect the mutual funds which have been a support for the $2 trillion market of the nation against risks. 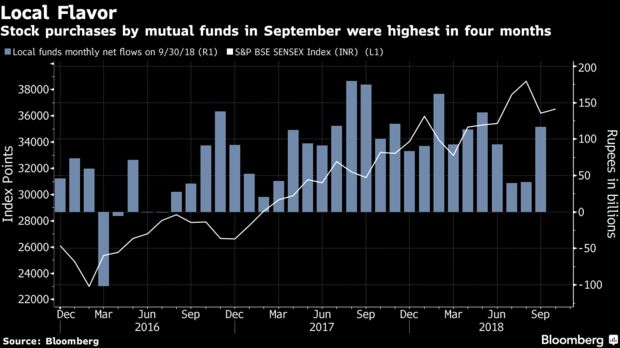 Equity flows are supported largely by retail, a segment that typically takes a bit longer to react to situations and is not as nimble as institutional investors. It is possible that investors, especially new entrants who have not seen a correction like this, may panic if markets don’t stabilize.

PM Narendra Modi has helped in the increase of individual investments to mutual funds since he came to power. The investors now own more than 22 trillion rupees in industry assets as reported by AMFI. This was the result of major changes in policy that included 2016’s currency clampdown and affected returns from gold and property which are traditional favorites.

The local funds have supported the Indian equity and kept it insulated from rising trade tensions between China and the US.

Regular contribution from retail investors should stay as they have been well educated on how investing regularly helps average out volatility. Also, a market bottom always pulls in investors, and even foreigners will be back to benefit from an oversold rupee and equities.